I met Matt Fagioli and Brad Nix earlier this year at the incredibly high energy RETech South, a Real Estate oriented event they staged earlier this year.Â  Last Friday they produced New Media Atlanta that created a lot of buzz in the SM Community.Â  I was sorry that scheduling conflicts kept me from attending. 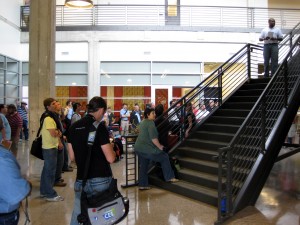 But, I did make it to another new media event, down the improved US Hwy. 78 from Memphis, WordCamp Birmingham, which focused on the WordPress blogging platform.Â  The event , held at Innovation Depot was well organized with the exception of the need for PA systems andÂ  better projectors.Â  Those minor glitches were probably the result of the huge number of folks in attendance- triple last year’s turnout, which blew out the original rooms designated for the sessions.Â Â  Among the presenters that I got to seeÂ  wereÂ  Dougal Campbell, Mitch Canter, Sara Cannon, and Andy Ford. Mr. WordPress, himself, Matt Mullenweg,Â  was the keynote speaker, discussing future WP developments and taking questions from the audience.Â  The day of sessions was exhaustive and exhausting.Â  Some of the content was over my head, but much was very useful. 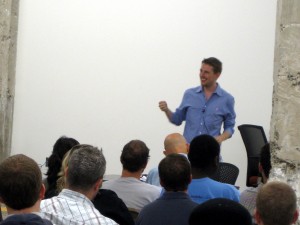 Day 2 featured a different venue, the very cool Shift Workspace, withÂ  “roundtable” discussions, which, for me, proved a good time to ask questions I thought too stupid to stand up and ask in front of scores of people.Â  The experts were open and helpful with theirÂ  answers and insights.Â  I especially enjoyed chats with Mitch Canter of Studio Nashvegas and Travis FinsethÂ  of Nuzu.