Most of the What’s going to happen in Technology in 2010 articles and blog posts have been published, many similar to this one from Globalthoughtz – 10 Technologies that will rock 2010.  I try to keep up with the major trends, but the amount of technology news and innovation out there is mind-boggling, even when it is aggregated to some extent by techie mega-blogs like Mashable and TechCrunch.  I read; I discuss; I participate in everything tech that I can, but I am still intimidated by the new technologies.  My new Android phone stayed in the box for a week before I was “ready” to start learning to use it, and now I have concerns that I won’t have it mastered before the Android generation of communication devices is replaced by something even more revolutionary. As sort of a new twist on the Peter Principle (check the link – this was a buzz word before most of you were born), we all rise to our level of technological incompetence.  I am a Boomer, and, hard as we try, we are just not wired like the Gen-Xs, Gen-Ys, and Millenials. 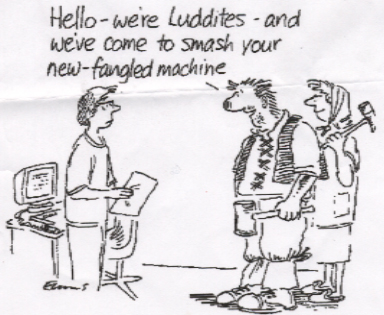 Last night, Craig Ferguson, the funniest man on TV, mentioned in his monologue that he was a Luddite, and went on to explain that the Luddites were a British protest movement of the early 19th century.  They were textile artisans opposed to mechanized looms and other advances of the Industrial Revolution that, they felt, were putting them out of work and unnecesarily changing the world.  The thread runs from Jonathan Swift to Emerson and Thoreau, and into the 20th century, especially in the environmentalist fiction of Edward Abbey.  The term neo-Luddite attempts to modernize the definition, but in these times when our electronic devices and associated detworks provide the context of our life experience, my friend, Bill Wendel coined the term Luddite 2.o. The context of my conversation with Bill was Luddism in Real estate – the resistance of Realtors to embrace technical changes in the industry.  It’s not only technical devices, but the transparent culture of Web 2.0 that fosters Realtor resistance; it’s the loss of control of data and absolute control of transactions too. [More on that in a future real estate-oriented post] As much as we may protest progress, it still rolls forward.  No doubt, each of us will reach his/her level of incompetence.  We are fighting Moore’s Law here. What do you think?  If you are a Boomer, do you feel you are keeping up or are you still analog?  Gen-Ys and Millenials, can you continue the conversation with us Boomers who are giving it a shot?