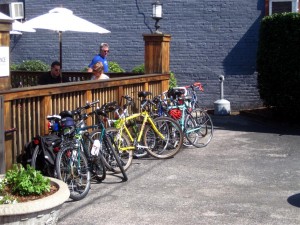 The City has plans to add bike lanes, and reduce the motorized vehicle traffic lane on Madison Avenue between Cleveland and Cooper Streets.  The new striping should be done when the section is repaved in the fairly near future.  Unfortunately, some of the more influential businesses along this stretch of Madison are against bike lanes and the restricted flow of motorized traffic  (one lane in each direction, plus a turn lane).  While groups like Livable Memphis, through Walk Bike Memphis, have raised a voice and demonstrated for the bike lanes,  the influential few seem to have put the project on the back burner.

What can you do?

If you would like to see the bike lanes, let the Mayor Know – email him Mayor@memphistn.gov or comment on his Facebook Page.  Also contact your City Council Person.  If citizens don’t support progressive alternative transportation, neither will their representatives.  The Green Lines are nice, but wouldn’t it also be nice to bike to a park, store, or restaurant in your neighborhood without fear of being run over by a car?

*If you’re a bike-friendly business and would like to support bike lanes on Madison, send an email to anthonycsiracusa@gmail.com or acemadjlesi@gmail.com.

Here is a short video, made through the windshield of my car, of the section of Madison where the bike lanes are proposed.

How do you feel about bike lanes on East-West and North-South traffic arteries?  Any suggestions for new bike lanes or routes?  Where would you like to go on your bike?