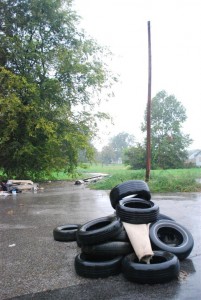 We Midtowners can keep on dreaming about being able to buy decent underwear, cute bed and bath items, and toys for the kiddies, west of of East Parkway at our very own big-box department store. The vast urban area roughly bounded by McNeil, Poplar, Court and Cleveland was to be the site of not only a big-box store, but upscale high-density urban housing, and other mixed use community-enhancing goodies promised by the developers.

I saw a presentation by the developers a couple of years ago, and they released some renderings and there was a general feeling of excitement that something big was going to happen in this blighted area.Â  Funny that after the initial hoopla, not much happened.Â  A few of the structures were demolished and hauled away but many, especially multi-unit apartment buildings were left to squatters, vandals, fire and the elements. The site was un-fenced until recently, when a ramshackle chain link fence was installed.Â  And now I guess it becomes a tax payer expense to secure the area.

Maybe American Wholesale Grocers would consider the site to make their already-preparedÂ  and aborted plans for Overton Square come to life – and maybe add a Family Dollar for good measure.

First a point some points of clarification:Â  This blog was spawned as a photo blog, and, henceforth, will be, with a minimum of commentary.Â  My verbiage in this series was based on a report on Channel 3 whose source, The Center City Commission, describes the buildings as “the Center City Commissionâ€™s list of ten downtown redevelopment sites that are important to the health and vitality of our city.”Â  However, the CCC did name it’s file top102.pdf.Â  My goal here is to post photos of Memphis from my personal perspective.Â  If you are interested in preservation, you will not find any better insight than the Gates of Memphis Blog. I posed the title as a question as a challenge to those who have the resources to do something with these buildings.Â  Do you think they are worth it?

Left is the Goyer-Lee House in Victorian Village (c. 1871), another from the list.Â  It’s a beauty, but has suffered from years of neglect.Â  It’s under the control of the Memphis Housing Authority. Would they sell it?Â  Can it be zoned for residential use again, or would a commercial use be more appropriate?

At one time Vance Ave., East of Danny Thomas was lined with similar mansions.Â  To my knowledge only one stands, partially restored.Â  The others were razed, burned, or left as piles of rubble.

What to do with the Tennesssee Brewery?Â  They shut down production of Goldcrest 51 Beer a long time ago.Â  Built in 1890 this fortress is on Tennessee St. at Butler and is included in the CCC’s list of Top 10 Downtown buildings worth saving.Â  IfÂ  I were going to produce a horror film in Memphis, this would be the place for the interiors.Â Â  As you exploreÂ  {I was granted legal access on a few occasions} the building you stumble on vestiges of sets [Check out the scene in I Walk the Line , where young Johnny C goes into aÂ  German music store to look at guitars-that’s the Brewery.] and the left over decorations from parties and galas, but a full tour of the building, up to the roof, is a ghostly experience. Â  You can almost feel the presence of the workers on the gothic staircases, feel the cold of the chiller room, and see the roustabouts loading barrels on wagons and trucks in the courtyard.

You have not seen the Memphis in May Fireworks until you have seen them from the roof.Â  This great building is high on my list of keepers.