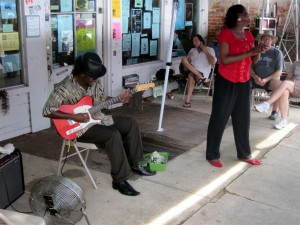 If you want to get to the roots of what  Robert Palmer was talking about in Deep Blues, you have to be at  this year’s Sunflower River Blues and Gospel festival, August 12-14, in Blues Mecca, Clarksdale, Mississippi.  If you are looking for what some call the blues, as played on $1500 guitars on Beale Street, this probably isn’t the festival for you.  This festival is about the Deep Blues, rooted in the Delta and it’s culture, some raw and gritty stuff.  It is always sweaty, sticky, hot.  There are lots of impromptu performances around the Downtown Clarksdale Area,  and there are some interesting places to grab Bar-B-Q, delta tamales and a cold beverage.  Be sure and drop by Ground Zero.
It’s an easy drive (about 1.5 hours) down Legendary Highway 61 from Memphis.  Click here for information and lineup.  END_OF_DOCUMENT_TOKEN_TO_BE_REPLACED 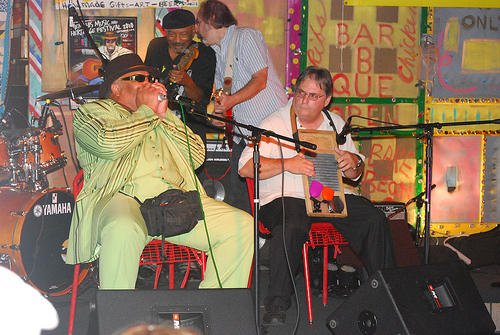 Blind Mississippi Morris closed out the Comcast Folklore Hall Stage at the Memphis Music and Heritage Festival, produced by the Center for Southern Folklore, last night. There is much much more Music, Dance, Storytelling, Cooking, Food and Kids’ Activities today (September 5).
Here’s the Schedule for today’s amazing lineup.
I will be managing the Comcast Folklore Hall Stage (just 1 of 4 great stages) all day. Come by and say Hello!

Thumbing through a Rolling Stone the other day in the barber shop and ran across this year’s list of music festivals.Â  Memphis is probably best known for the Beale Street Music Festival which kicks off Memphis in Mud May every year, but there 3 fine festivals close by that bring in music fans from all over the world.Â  Can Kansas or Ohio have a Blues Festival?Â  Well sure; and they do, but Morgan Freeman and business partner Bill Luckett didn’t name their Blues Club in Clarksdale, MS Ground Zero for nothing. 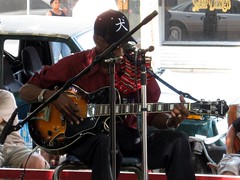 I don’t intend to go into a musicology discourse, but if you want to see what real roots Delta Blues and culture looks like, don’t miss the Sunflower River Blues and Gospel Festival in Clarksdale, August 7-9.Â  This year’s festival is a tribute to Sam Cook, a Clarksdale native.Â  While the festival adds a name act or 2 that occasionally push the genre envelope, this festival experience gives you a real feel for the Mississippi Delta music and culture.Â  Drive some backroads while you are in the area.Â  Take Mississippi Hwy 1 to Rosedale; eat some Delta tamales and bar B-Q; talk to the locals- they are interesting folks.Â  For Memphians, or if you have a place to stay in Memphis, it’s a little over an hour drive to Clarksdale, so Â  you can commute.Â  Accomodations are a little sparse and book up early, but if you want to be a REAL Delta tourist, stay at The Shack Up Inn. 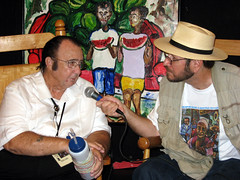 Next up, in chronological order, a festival I have been affiliated with as a volunteer, and more recently a sponsor, The Memphis Music and Heritage.Â  Staged by the Center for Southern Folklore in 5 venues varying from out door stages, to small club setting, to restaurant/concert hall (all within a block of each other), the festival presents the rich culture of the Memphis area with demonstrations, story tellers, dancers, cooking demonstrations, and of course music.Â  This has got to be one of the most eclectic festivals in the world.Â  Where else, over the course of a couple of days, could you urban gospel groups, Delta Blues musicians, Rockabilly musicians that Elvis and Johnny Cash opened for, rappers, rockers, jazz, Blues and Funk and folk.Â  This festival is Memphis’ best kept secret. It is held the Saturday and Sunday before Labor Day (September 5 & 6) on Main Street.Â  Plenty of accomodations Downtown and around Memphis (watch out for Ole Miss and U of Memphis fans in town for the traditional football operner.)Â  Â  Oh, and did I mention food?Â  Just let me know you are coming and I will tell you where and what to eat.

Also nearby to Memphis and across the river is Helena, AR, home of the Arkansas Blues and Heritage Festival. This is the venerable festival that used to be known as the King Biscuit Blues Festival, until organizers lost the right to use the name.Â Â  It’s a 3 day festival in October, probably the Mid-South’s most pleasant month weather-wise.Â  This is a big one.Â  Lots of acts; lots of food; lots of festival atmosphere.Â  At this writing they are still putting together the website for this year’s event, but the festival has an impressive social media presence, so follow them on Twitter, fan them on Facebook, and subscribe to their RSS news feeds.

Whether you are from the Memphis and Delta area or some other place in the world, these are truly one of a kind festivals.Â  Y’all come see us.