I lost the original post asking for your help in filling in some Midtown Memphis Neighborhoods when I had to do a major server change.  So, in the meantime I have updated it some.  Click on the map for details.  Your continued input on neighborhoods not already highlighted will be appreciated.

The Marketplace of the Mid-South

I was looking up something about Memphis when I ran across a link to http://lostmemphis.com in a Wikipedia article.  The link takes you to a page of http://mallofmemphis.org, a tribute to Memphis’s flagship shopping mall.  The site is a captivating historical piece presenting a thorough story of the mall from its beginnings to its ultimate demise and demolition. So I was stuck there for quite a while looking at pictures and reading about the mall in a format that could very well be the website of a fully operational mall.

Whether you are new to Memphis, or an Old-timer like me, you will definitely find something interesting here.

If you are interested in purchasing your piece of  Memphis’ history, I am real estate broker specializing in historic an in-town properties.  I  would be happy to assist you. 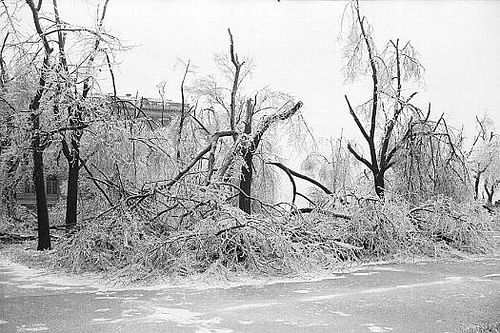 Seeing the ice on the trees this morning reminds me of a morning in 1994, waking up to a series of muffled crackles and crunchs, not quite realizing at the time that the sounds were large tree limbs splitting and falling.  I don’t remember that is was very cold that morning, 30-31 degrees being optimal for ice storm conditions.

I was a network engineer at BellSouth at the time, and I got the call to come on into work, and plan on staying over if things got really bad, so I put a sleeping bag in the car, and picked my through the debris from East Memphis to my Midtown office.  Actually, the majority of trees had not fallen at that time; they continued to fall throughout the day as I attempted to ride the streets of my area of responsibility (Midtown and Downtown), not to attempt to restore telephone service, but to report hazardous conditions. And the trees kept falling. A huge one just missed me as I was talking to some folks on Snowden, near Rhodes.  We had to run to get out of the way. By noon, it was sunny and rather warm (above freezing) but the ice load was still working on the trees, power lines and telephone cables.  Most of the ice had melted by the end of the day.  By the time it was all over, the city looked like it had been bombed.  Many were without utilities for weeks.  Midtown was especially hard hit. The clean up seemed to go on forever.

I wasn’t doing too many photos back then, and I didn’t photograph anything during that day or the following day.  One memory that stands out is getting back home (very little damage to my trees)  after the ice was gone and finding pine needles standing in my yard in little holes.  Encrusted with ice they had fallen, driving themselves into the soft ground. As devastating as Hurricane Elvis was in 2004,  the ice storm was much more eerie, and I will never forget the slow, crackles of the limbs breaking away and falling.

Were you in Memphis in 1994?  What are your memories of the Ice Storm?