Flood tourism has dropped off sharply since the river crested last week; and while the river is at a level today (43.8 feet) that would rate as the 4th highest crest in history, there were no tourists or picture takers but me on Mud Island.  There is an incredible amount of driftwood on the banks.  The river is receding slowly, but falling waters just aren’t as sexy as an impending flood.  There’s a long way to go before things return to normal. END_OF_DOCUMENT_TOKEN_TO_BE_REPLACED

[Note:  We urban and suburban dwellers in the Memphis area don’t think nearly enough about the extent of the area’s agriculture business and its impact on the economics of our region.  I asked my friend Janice Person to guest post on the impact of the flooding Mississippi River and its tributaries on agriculture in our region.  js]

In the past week Memphians have learned an awful lot about flooding from reading and watching news and information. Looking west from high up on the bluff, one has to wonder about how all that water pouring into Arkansas farm land is impacting the area’s farmers. Having spent a lot of time photographing the skyline from that side of the river and having spent a decade in the Delta, my heart goes out to them and I had to call a friend or two to see how things were.

Allen Helms is a cotton farmer in Clarkedale, Arkansas who lived in the Evergreen section of Midtown for years. He says he and others in agriculture have been preparing for the issues of forecasted high water for quite a while.

The levee system on the Mississippi seems to be working but Helms knows the St. Francis (Arkansas, Yazoo (Mississippi) and Loosahatchie (Tennessee) continue to rise and flood farms and communities. And Facebook updates I’ve seen show that farmers have been attending levee board meetings as well.

Helms says the Corps of Engineers is working to maintain the river system at large and knows that just a short drive away, farming friends are facing challenges due to the levee being blown. Recovery in those areas will take significant time and everyone’s hearts go out to the communities impacted.

Although Helms and others would normally be further along in planting the year’s crops, knowing the river was going to rise and having several weeks of rain kept farmers from planting much that could be lost to flooding.

When you farm along the river, generally farmers will hold off planting the “bottoms” or ground that tends to be wet in the spring, to last. While planting is delayed for cotton, Helms says the bigger concern is likely for farmers who contracted corn early and have yet to get in the field because corn is usually planted earlier to get a longer growing season.

Wheat crops in the area look good and will begin to be harvested in a few weeks. Hopefully by then, water levels will be receding. This is important for getting the crop to storage and to market. 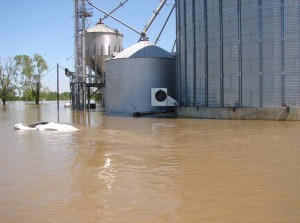 Harvest means moving grain around both on the farm to bins like these outside of Ripley that were emptied before water overtook them. Harvested wheat will usually go in on-farm bins or be transferred to larger facilities like Cargill and ADM. Those companies have locations on President’s Island to enable effective use of barges. Many of these businesses have closed locations temporarily as water has risen. And with high river levels, some of the smaller rivers have already closed to barge traffic, the Mississippi appears to be navigable for now. We just need to hope this return to normal before harvest gets underway or there may be some disruptions.

For now, a few farmers have a few fields that are finally dry enough to start planting. News along that line is creating a lot of hope for the others who wait for rivers to recede.

Janice Person is a native Memphian who’s had the chance to learn agriculture by working in communications. Having lived in Oklahoma, New York and the Mississippi Delta, she was thrilled to return home a few years ago. Her love of cotton is shown in both her personal blog address and Twitter ID. She currently works for Monsanto doing social media outreach and some blogging.