No matter what your religious or political beliefs, there is a special thread that connects  all of us during this time of the year.  Thanks to all of you who have followed this blog.  Have a wonderful holiday with your followers and friends, and lets have high hopes for healthy, peaceful, and prosperous 2012. 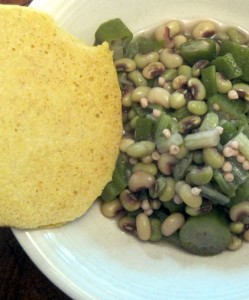 My grandparents were born in south Alabama about 30 years after the Civil War; both were richly steeped in the traditions of the rural Old South.  My Grandmother (we called her Ma’sie) taught me to cook at a very young age.  It’s kind of  a-little-0f-this-and-a-little-of-that style of cooking, but I think I am pretty good at making the southern staples.  While I remember the stories, legends, and superstitions that Ma’sie  taught us through her 90+ years, some of my best memories about her had to do with food.  Ah, that food; I will have to make some notes for future posts, because this post is about the traditional Southern New Year’s day good luck food.

I never knew the roots of  good luck tradition involved with eating black-eyed peas,  jowl (and other pig parts), turnip or collard greens, cornbread, and a  New Year’s-only cole slaw that was about half onion.  I was just told I had to eat it, and I obeyed.

I have researched the good luck food traditions over the years and found some interesting history. 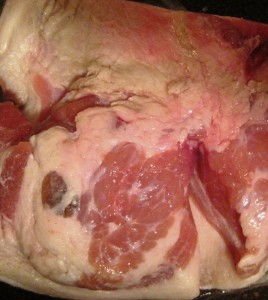 I found some pretty lean jowl this year

The custom of eating pork on New Year’s is based on the idea that the pig symbolizes progress; always pushing  forward, rooting in the earth.  I always had to eat a little jowl in New Year’s, but Ma’sie boiled pig feet and tails, and everyone in the South uses ham hocks for seasoning.  Eating all these parts that would normally be thrown away probably harkens back to the days of home hog butchering when “the only thing you didn’t eat was the squeal.”  And for the record, I have never eaten Chitterlings (Chitlins)

Turnip, collard, and mustard greens are quite different.  I guess you see more turnip greens because they produce an edible root, but they are all good (Where to get the best greens in Memphis is also for another post.).   It’s pretty obvious that those boiled green leaves represent folding money in most cultures. 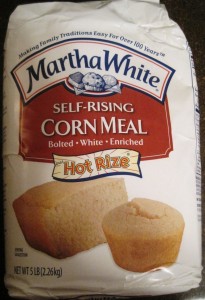 Cornbread is an old Southern tradition.  Corn, corn meal, and grits, it’s all magical stuff.  I never add sugar to cornbread, and refuse mixes that contain sugar.  A great mix is Martha White Yellow Corn Meal with “Hot Rize”.   I cook it in an iron skillet or cast iron corn stick pans in the oven, or on the griddle in the hoe cake tradition – southern field hands using their hoes as griddles over open fires to cook a mixture of cornmeal and water.  I don’t know what the good luck significance is but, trust me, cornbread is the perfect compliment for the other foods.

Black-eyed Peas are the most interesting of the good luck foods.     They also represent money – coins.   Some sources say the black-eyed pea that go all the way back to the Pharaohs in ancient Egypt. They were eaten by the pharaohs, to bring them humility.  The “good luck” traditions of eating black-eyed peas at Rosh Hashana, the Jewish New Year, are recorded in the Babylonian Talmud.  Black-eyed peas, or cow peas may be the lowliest of the legumes.   The peas were easily grown, heat and drought resistant, and were used for many generations for animal fodder.  In the story of the Prodigal  Son: “And he would have gladly filled his stomach with the pods that the swine were eating, and no one was giving anything to him.” (Luke 15:16), those pods could have been black-eyed peas.

In the United States, the first Sephardi Jews arrived in Georgia in the 1730s, and have lived there continuously since. The Jewish practice was apparently adopted by non-Jews around the time of the American Civil War.  And there are a number of stories about black-eyed peas and the Civil War.  Some suggestions about why the pea is revered as a good luck food in the South:   Sherman’s Army didn’t burn and pillage the black-eyed pea fields because they were thought to be animal fodder,  not fit for human consumption; so the peas led to the survival of many starving Southerners.  And there’s the story of the citizens of Vicksburg surviving on black-eyed peas during  Grant’s 40 day siege of the city.  I guess, for Southerners, a symbol of determination and survival.

Anyway, it’s all wholesome food, with, perhaps, the exception of the jowl.  Prepared properly it’s some good eatin’; and you have to try it to find out if that good luck thing works.

May you Holiday Season be Joyous, and may your New Year be peaceful and prosperous

Here’s my best gift of all, seeing my son George walk down the aisle to pick up his diploma. University of Memphis BBA. Congratualtions, George!